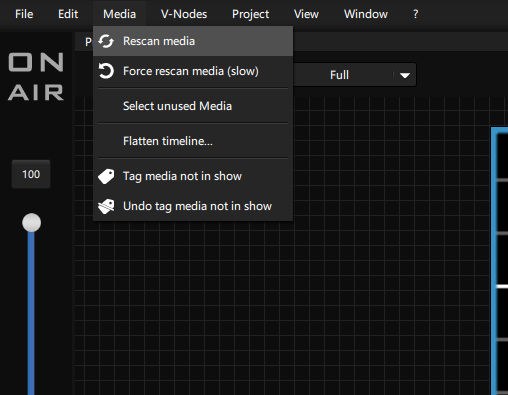 Rescan media: Scan for new media added.
Force rescan media(slow): Force the rescan of all media.
Select unused media: Select all media that are not used in the project. You then can easily remove them from your project.
Flatten timeline…: Open a popup menu to launch the rendering of a part of a timeline and create a new media with the result of the rendering. The rendering is done in the Kinetic VNodes, not in Kinetic Designer.
Tag media not in show: Tag unused media by adding the prefix ##old## in the filename of all media in your Kinetic Designer harddrive. You then can search for ##old## in your windows explorer and remove all media with this tag. It’s a convenient way to remove unused media in your harddrive.
Undo tag media not in show: Remove the tag ##old## from the filename of the media in your Kinetic Designer harddrive.

!Always organize your project with a root folder in your data harddrive. Then use only media that are part of the root folder or of one subfolder.